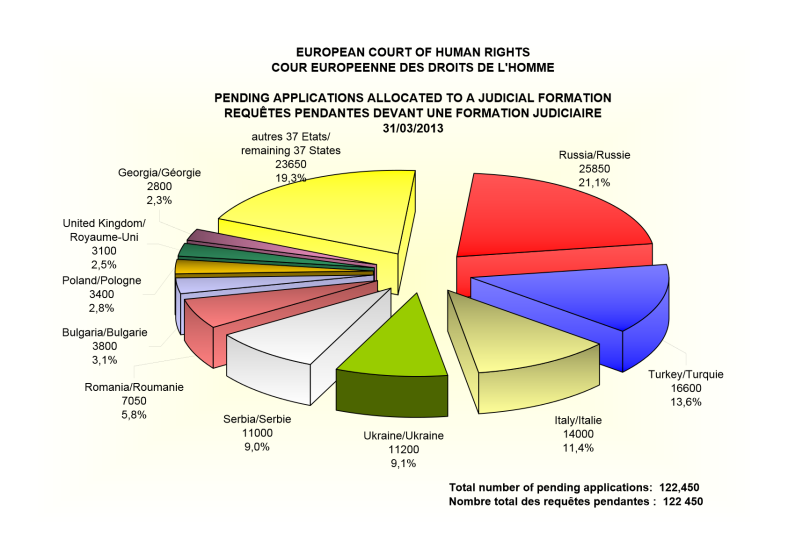 On June 30, 2011 the European Court of Human Rights (ECtHR) had a grand total of 152,800 applications pending before it. By March 31, 2013 this number had been reduced by over 30,000 applications in one and a half year – to a total of 122,450 pending applications. This astonishing development proves that the recently implemented Protocol 14 to the European Convention on Human Rights, and the restructuring of the ECtHR’s registry, is in fact working.

If the ECtHR can keep this pace up, simple mathematics implies that it will have cleaned out its docket by 2021. Or maybe even before that, considering the fact that the number of new applications is slowly decreasing. This suggests that any further attempts at increasing its efficiency or reduce its current caseload should be of a temporary nature, as the ECtHR would been able to cope well if its docket was not already flooded when reforms could finally be put in place.

The big question is, however, whether one can apply such simple mathematics. Protocol 14 aims mostly to squash and filter out the most glaringly inadmissible applications. Apparently, the registry of the ECtHR was reorganized with the same goal in mind. If the 30,000 applications thrown out in the last year and a half are mainly those that are clearly inadmissible, the numbers may be skewed. Throwing out clearly inadmissible cases requires much less resources than deciding admissible cases on the merits.

It therefore remains to be seen whether the simple mathematics stated in my rather provocative header are an accurate prediction of things to come. My gut feeling is that simple mathematics are inadequate. To find a more accurate answer I think that we need a study of the composition of inadmissible/admissible cases of those 30,000 removed from the docket the last year and a half. This must then be compared with the expected composition of admissible/inadmissible cases before the ECtHR in total.

(If anyone knows of such studies, or relevant and available data, please give me a heads up in the comments.)

As reported by news agencies just before the weekend, the European Union and the 47 member states of the Council of Europe has just agreed on draft legal instruments that enable the EU’s accession to the European Convention on Human Rights – after almost three years of negotiations. Antonie Buyse over at the ECHRblog has written a good and concise post on the topic already, which I recommend that anyone with an interest in the process should read.

While it was common knowledge that the negotiations were on the final stretch, at least I would not have expected that the final instruments would be ready before at least the next meeting of the delegations. That the delegations were able to solve all the outstanding issues this quickly must be seen as a positive sign, and suggests that the remaining obstacles will not render this agreement moot.

As Antonie Buyse mentioned in the above-mentioned post at ECHRblog, three main hurdles remain. First, the European Court of Justice (ECJ) will be asked to give its opinion on whether the draft instruments are compatible with EU law. If the ECJ finds that the draft Accession Agreement is incompatible with EU law, it has the power under TFEU article 218 (11) to forbid the EU institutions and the EU member states from entering into the agreement. However, most experts consider it unlikely that the ECJ will reject the Accession Agreement.

Secondly, a formal decision to sign the instruments and accede to the ECHR must be made by the Council of the European Union, after obtaining consent from the European Parliament, see TFEU article 218 (6)(a)(ii). Since the Council consists of 27 of the states that participated in the drafting of the Accession Agreement, there seems to be little risk of them blocking a decision. The European Parliament is also generally in favor of acceding to the ECHR. It is thus difficult to see that they would try and block the process.

Thirdly, the signature and ratification by all 47 member states of the Council of Europe + the EU itself is needed before the Accession Agreement enters into force. 27 of these 47 states are EU members, and will be bound to sign and ratify the agreement upon the above-mentioned decision in the EU Council. The EU will also be bound to sign according to the same decision. As for the 20 remaining CoE states it will be more interesting to see whether they will cooperate, whether they intend to block the process, or even block it. Russia did, for instance, refuse to ratify protocol 14 to the ECHR for years and years.

Only after going through all these loops, the Accession Agreement will enter into force, and from that day the EU will formally become the 48th party to the European Convention on Human Rights.